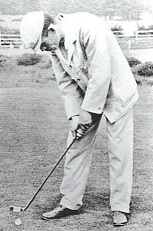 Born Musselburgh, Midlothian (1864 to 1925). The career of Willie Park Jnr demonstrates changes in the role and status of the professional golfer. The son of a famous father, he was soon involved in club and ball making and won his first tournament at the age of 17. He was 'given' his first Open victory when his closest rival, Willie Campbell, took 9 on the 34th hole after encountering one of Prestwick's deep bunkers. Park was back at his Musselburgh workbench the next morning.

His second Open win also contained a streak of fortune. Andrew Kirkaldy contrived to miss a one-inch putt which allows Park to catch him and in the play-off Park won convincingly.

The status of Open champion offered business openings. Park threw himself into clubmaking and had shops in London and New York. He was an innovative designer and his bulger driver and wry-necked putter were particularly popular. (Park was renowned for his putting and coined the slogan 'the man who can putt is a match for anyone'.) He also took early opportunities to involve himself in golf architecture.

As a result of these activities Park's golfing skills declined but he took part in some famous matches. With the advent of mass manufacture of clubs, he devoted his latter years to course design and construction, working in Britain, Europe and intensively in North America. He is regarded as the first great golfcourse architect, with Sunningdale Old being his masterpiece.