The Morris family name will be forever linked with the history and evolution of the game of golf. It has also played a huge part in establishing Prestwick as one of the world’s most iconic golfing venues and a must-play course.

It all began in St Andrews where Tom Morris was born and where he undertook an apprenticeship with Allan Robertson who educated him in golf ball design and construction. By the time he was 30, Old Tom had a flourishing reputation and was appointed Prestwick Golf Club’s first Keeper of the Green, Ball and Club Maker at the request of Major James Ogilvy Fairlie of Coodham.

His son Tommy was just two-months old when in 1851 the family moved from St Andrews to Prestwick and the cottage bought for them by the club. Old Tom laid out a 12-hole course for the newly formed club and also represented Prestwick in Challenge Matches either individually or in partnership, often with his mentor Major Fairlie. 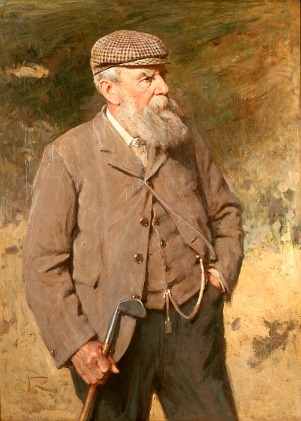 Although Old Tom’s on-course work created an epic links layout (six of the original greens are still used today), the Morrises are probably best remembered for their triumphs in competition.

Father and son won the Open Championship four times each, dominating the event from 1867 to 1872. In 1870, Tommy was presented with the Championship Belt for three consecutive wins and then won the event in 1872 when the Claret Jug was first introduced.

Tommy played in his first Open at the age of 14 and holds the record as the youngest winner, aged 17, while Tom has the distinction of being the oldest at 46. There is little doubt that Tommy was the best golfer but the tragic death of his wife had a massive effect on him. He survived her by only a few months and died on 25th December 1875.

Although Tom and his family returned to St Andrews in 1864, they visited Prestwick regularly to take part in Open Championships and visit their close friends; the Hunter family. Tom’s daughter Lizzie, who was born in the town, married James Hunter in 1875. Charlie Hunter, a cousin of James, succeeded Tom as Prestwick’s Keeper of Green in 1864 and, after a short spell at Blackheath, served Prestwick from 1868 to 1921.