The 16th June 2021 is the bicentenary of the birth of Tom Morris. Morris played a key role in the evolution of the course at Prestwick and was remembered earlier in the day in a ceremony at the Club.

Morris came to Prestwick Golf Club in 1851 as its first Keeper of the Green and Ball and Clubmaker. He laid out the original 12 hole course - the first of many courses he was subsequently to design.

Morris hit the opening tee shot in the first Open Championship which was played over the Prestwick links on 17 October 1860. The site of the first tee is marked by a cairn which was inaugurated by 3-time Open Champion Henry Cotton in 1977.

In a ceremony earlier today a plaque commemorating the achievements of Morris was unveiled close to the cairn.

Club Captain, Pat Lockett, said, “The name of Tom Morris will be forever linked with the history and evolution of the game of golf and with Prestwick Golf Club. The original 12-hole course that he laid out at Prestwick was the fore-runner of many iconic courses he designed. He was also instrumental in the extension of the course to 18 holes in 1882.

The fact that the course has stood the test of time and has survived relatively unchanged, is testament to his skill and vision.

As a player, his ability was possibly only surpassed by that of his son, Tommy. They both won the Open on four occasions over the Prestwick links between 1861 and 1872." 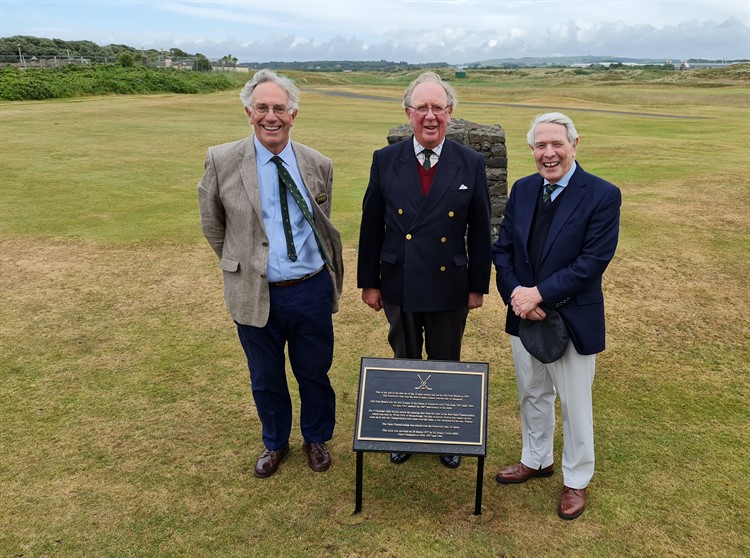 Brothers Tim and Brian Morrison, both Past Captains of the Club unveiled the plaque. This was particularly fitting as Tim is the godson of Henry Cotton.