A simple stone cairn to the west of Prestwick’s clubhouse marks the spot where the first Open Championship tee shot was struck in 1860. It identifies the opening hole of the original 12-hole course and the place where modern golfing history began.

The tournament had been arranged following the death of Alan Robertson of St Andrews in 1859. Robertson was one of the first golf professionals to make a living from playing for bets, caddying, ball and club making and instruction, and was considered the best golfer at the time. In fact, he was so good that tradition has it he never lost when playing for money. 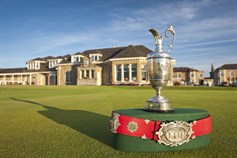 Eight professional players competed for the prize of a red Morocco leather belt with silver clasps and an ornamental silver buckle. The impressive girdle cost £25 and was paid for by the club’s members. It eventually rested on the hips of Willie Park of Musselburgh who recorded a score of 174 for 36 holes (three rounds of 12 holes) bettering Old Tom’s tally, who represented Prestwick, by two strokes. 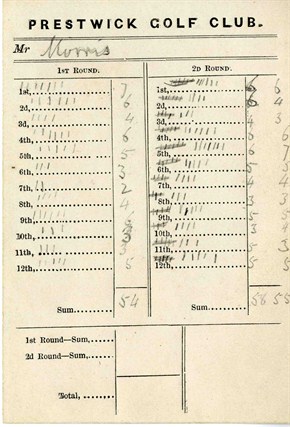 Old Tom would have his day and went on to win the championship four times, as did his son Tommy who secured three consecutive wins and ownership of the leather belt. He went on to record the Championship’s first hole in one and a modern-day albatross on Prestwick’s 578-yard opening hole. The original scorecards on which these achievements are noted are among the most treasured items in Prestwick’s archive collection.